When a female becomes pregnant, she experiences many bodily changes, as well as the emotional and psychological effects of pregnancy. Some of these changes are quite easy to detect such as weight gain, back pain, and swollen ankles, while others are subtler. Although different women experience very different symptoms during their pregnancy, there are some telltale signs that appear commonly and consistently.  Pregnancy changes your hormonal balance, which can cause several symptoms. Here is what one can look for:

Of course, just because someone is experiencing a few of the symptoms above does not mean that person is definitely pregnant. These symptoms can occur due to a variety of other reasons besides pregnancy. Taking a pregnancy test a few days after a missed period is a much more reliable way to determine pregnancy.4 As an extra precaution, take multiple tests a few days apart.

Missing one or more menstrual periods is a typical sign of pregnancy. Menstruation is the shedding of the uterine lining, but when a female is pregnant, the embryo implants itself into the uterine lining and is retained inside the womb. Because the lining is not shed during pregnancy, a female does not menstruate. However, missing a period cannot always be a reliable sign of pregnancy if you have irregular or missed periods.1 Causes of missed or irregular periods include the following:

Teenage females should also keep in mind that missed periods can occur because the hormones controlling their cycle may not become regular for the first few years of menstruation.

Implantation bleeding can be one of the earliest signs of pregnancy, typically occurring around 6 to 12 days after conception. The spotting is caused by the embryo implanting itself into the uterine lining. However, there are many other causes for spotting or light bleeding in between periods, which include the following:

For most females, these symptoms are not the first sign of pregnancy, as they usually occur after the first missed period or after a positive pregnancy test. Other reasons for swollen or tender beasts may include the following:

Nausea and vomiting, a combination of symptoms commonly called “morning sickness,” are another classic sign of pregnancy. Morning sickness is a bit of a misnomer, as nausea from pregnancy can strike at any time of the day. However, it does generally start during the morning, and gradually subside throughout the day.6 Morning sickness typically occurs from around 2 to 8 weeks after conception. Nausea and vomiting are likely caused by the increase in hCG (human chorionic gonadotropin) and estrogen levels, but currently the complete explanation of the symptoms is unknown by medical professionals.3 A more sensitive sense of smell during pregnancy is also believed to cause nausea as it triggers a gag reflex.5 If a female is not pregnant, other causes for nausea may include the following:

Frequent urination is one of the early signs of pregnancy, occurring around 6 to 8 weeks into the first trimester. The hormonal changes in the body cause an increase in blood flow to the kidneys, filling the bladder with urine more often. Additionally, a normal pregnancy causes an increase in blood plasma volume by almost 50%; this excess amount of fluid is processed through the kidneys and winds up in the bladder.2 In the last 3 months of pregnancy, frequent urination can return due to increased pressure on the bladder from the growing fetus.

It is important that pregnant women do not restrict their liquid intake to avoid frequently urinating. Pregnant women should be drinking about 6 to 8 fluid ounces of water a day (177 to 236 mL) to help maintain a healthy fetus and avoid dehydration. To avoid needing to use the restroom frequently at night, females can drink the majority of their liquids during the day and less at night. Avoiding diuretics like coffee and tea can also help relieve frequent urination.

Fatigue and mood swings begin during the first trimester, largely disappear in the second trimester, and then return at the end of pregnancy.3 The full reason for fatigue is unknown by medical professionals, but the likely culprit is the increase in progesterone. The other symptoms that occur during pregnancy, such a nausea and vomiting, can be exceptionally draining. Mood swings are also largely due to hormone changes, and it is important for pregnant women to know that mood swings are a normal symptom of pregnancy, and that they are not alone. To cope, make a habit of getting to bed early and try to take naps during the day. Pregnant women should be sure to set aside time for themselves and can try managing stress levels by exercising or meditating regularly.

Changes in the Areola

The areola is the circular area of skin around the nipple that is a different color from the rest of your skin. This tissue has muscle fibers to make the nipple erect in preparation for nursing a baby. The areolae also contains Montgomery glands, which secrete oils to help lubricate the nipple area and prevent infection. Various changes may occur in the areolae in preparation to nurse a baby, including the following:

The purpose of these changes is to help the baby spot the milk source and to prepare the area for suckling and lactation. 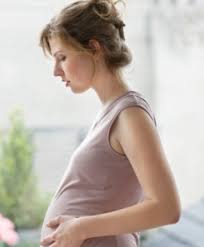 In the third trimester of pregnancy, the breasts will lactate colostrum, a thick yellowish fluid that is packed with the antibodies and proteins that are necessary for the baby in the first few days following birth. Lactation will often occur during times of intimacy as lactation is controlled by the hormone oxytocin, which itself is triggered by feelings of love and affection.  Nursing pads, sold at drugstores, can be worn within a bra to protect clothes from leakage.

These contractions are difficult to distinguish from preterm labor. If you are experiencing more than four contractions in an hour before your 37th week of pregnancy, contact your caregiver immediately.

Do all women get early pregnancy symptoms?

The answer is no; every pregnancy is different. Not only do symptoms vary from female to female, but the same individual can have varying symptoms from pregnancy to pregnancy. Some women experience no pregnancy symptoms at all.5 This fact is why it is most important to use a pregnancy test to determine if you are pregnant or not. If you are experiencing any of these symptoms and need any medical attention, please consult with your doctor.

For information on local clinics in the USA and the services they offer follow this link to a nationwide database.