Being Pregnant with Twins

In roughly 2% of all pregnancies, two offspring result from a single pregnancy, leading to the birth of twins. There are two types of twins–fraternal and identical–that are formed through separate processes taking place during sexual reproduction. The third type of twins–the semi-identical twins–form when two sperm cells fuse with a single egg, resulting in two offspring who share identical genes from their mother but have unique sets of their father’s genes. However, semi-identical twins are extremely uncommon: only one human case has ever been reported. Thus, this article will focus solely on identical and fraternal twins.1

Identical twins form as a result of one sperm cell fertilizing one egg and forming a zygote (just as with a single-fetus pregnancy). During a single-fetus pregnancy, however, the fertilized egg will divide continually as the pregnancy progresses, forming a single structure of cells known as a blastocyst. In the case of identical twins, the zygote will split into two separate embryos (developing fetuses) in the first week and result in two identical fetuses. This separation of the fertilized egg can take place at three different junctures:

The time at which the fertilized egg divides determines how “independently” the twins develop in the uterus: the earlier the zygote splits into two embryos, the fewer organs these embryos share during pregnancy.2 The twins may share the placenta, chorion, or amnion depending upon the egg’s time of division. The placental membrane separates the mother’s blood from her child’s blood, only allowing oxygen and nutrients from the mother to be transferred to the child. The portion of the placental membrane attached to the fetus is called the chorion. The amnion provides a nutrient rich sac for the fetus to safely develop inside the mother’s womb.3 Twins that split during the two-cell stage will develop their own amnion, chorion, and placenta, whereas a pair of twins that are formed in the late-blastocyst stage will share an amnion, chorion, and placenta.2

Fraternal twins form when two different sperm fertilize two separate eggs during sexual reproduction. During ovulation, a female will oftentimes release two eggs rather than one, allowing the possibility for two eggs to be fertilized at the same time, but by two separate sperm. It is important to note that fraternal twins do not share identical genes (as with identical twins) because they are not formed from the same sperm or egg. Though fraternal twins are born at the same time, they do not look exactly alike, might not share the same sex, and will not be more closely related to each other than any other sibling in the family.2

Formation of Triplets and Upwards

Identical triplets form in a very similar way to identical twins, but after the single egg divides in two, one of those halves divides again forming three identical fetuses. The formation of fraternal triplets, on the other hand, requires the female to release three eggs during one period of ovulation that would then need to be fertilized by three separate sperm. Mothers who bear more than three children at once will often have a mixture of identical and fraternal twins. The most common type of triplet born is a mixture of two identical twins and one fraternal twin.4 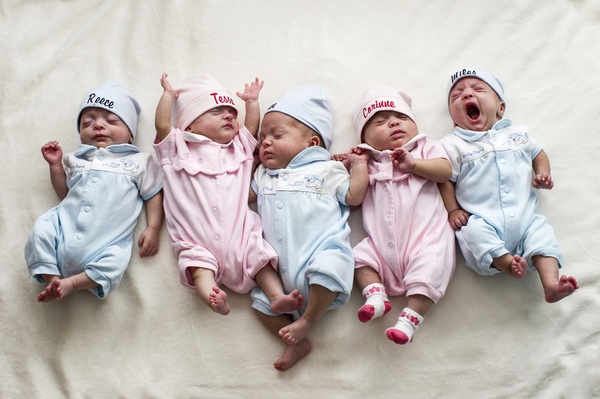 Facts for Mothers with Twins and Upwards