A snuff film is a feature film that depicts an actual murder, without the use of special effects, for entertainment or financially exploitative purposes. Snuff films rely on shock value to scare, disgust, and horrify the audience. Some snuff films exclusively feature a murder, but many also include acts of sexuality and sexual violence. Snuff films are believed to have originated as part of the early pornography industry; over time they have become more integrated with the rest of the film industry. Though many snuff films do exist, there has never been conclusive evidence that any of them are authentic and use more than special effects and editing to depict the killing on screen. 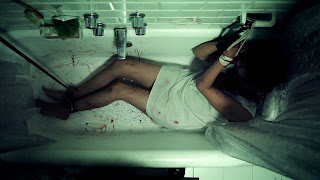 Snuff films can be problematic as the sexuality depicted in them is often forced and violent, with much of the violence directed towards women. This can have negative effects on viewers who may perceive the behavior depicted on screen as realistic and socially acceptable, normalizing the behavior. Research suggests that watching violent content on television and film can be problematic. Cultivation theory states that the more time people spend living in the world of film and television, the more likely they are to believe in the social reality that is portrayed by these mediums. This leaves people with a misperception of what is true in the world around them. The theory can be extended to the world of snuff and horror films: the more people watch these films, the more likely they are to believe that the horror depicted on screen is a normal and expected part of every day life.

Though there has never been conclusive evidence of an actual snuff film, they are a common element in the horror film genre today. Horror films aim to shock, disgust, and instill fear, and that is exactly what a snuff film is designed to do. The snuff films included in horror movies today often involve webcams and other new forms of technology. Snuff films are referenced in contemporary films such as Wes Craven’s Scream 4 (2011) and Sinister (2012) and in television shows such as Dexter and the fourth season of the FX horror anthology series, American Horror Story.

In contemporary culture, snuff films tend to be used for entertainment purposes within the horror genre. Both pseudo snuff films and real snuff films, if they do exist, are problematic. They are harmful, as they depict murder and violence, usually against women. It is important to understand that snuff films are not accurate depictions of reality and should not be made under any circumstances.