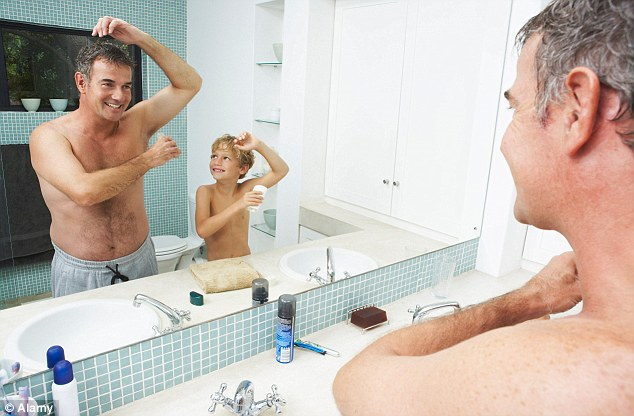 Puberty is a stage of development during which boys’ and girls’ bodies begin to develop and change into those of young men and women. During puberty, the body grows faster than it has since the first year of life. It is important to realize that everyone goes through the changes, embarrassments, and confusion that can be associated with puberty—it is a normal and necessary process! This article details the changes that males will go through during puberty. Everyone experiences puberty at different times, and eventually, all young males will develop traits of young adults. While these changes are similar for most males, remember that variation is normal and no two people are exactly alike. There is no right or wrong way to develop; that is the beauty of the human body!

Most males begin puberty between the ages of 9 and 14, but commonly puberty will begin around 12 years old. When the human body reaches a certain weight (which differs among individuals), the hypothalamus releases the gonadotropin-releasing hormone. This hormone signals the pituitary gland to release the two hormones that begin the onset of puberty: leutinizing hormone and follicle-stimulating hormone.7 In males, these hormones stimulate activity in the testes, which start to produce the male sex hormone testosterone and begin spermatogenesis. Spermatogenesis is the process of sperm production. 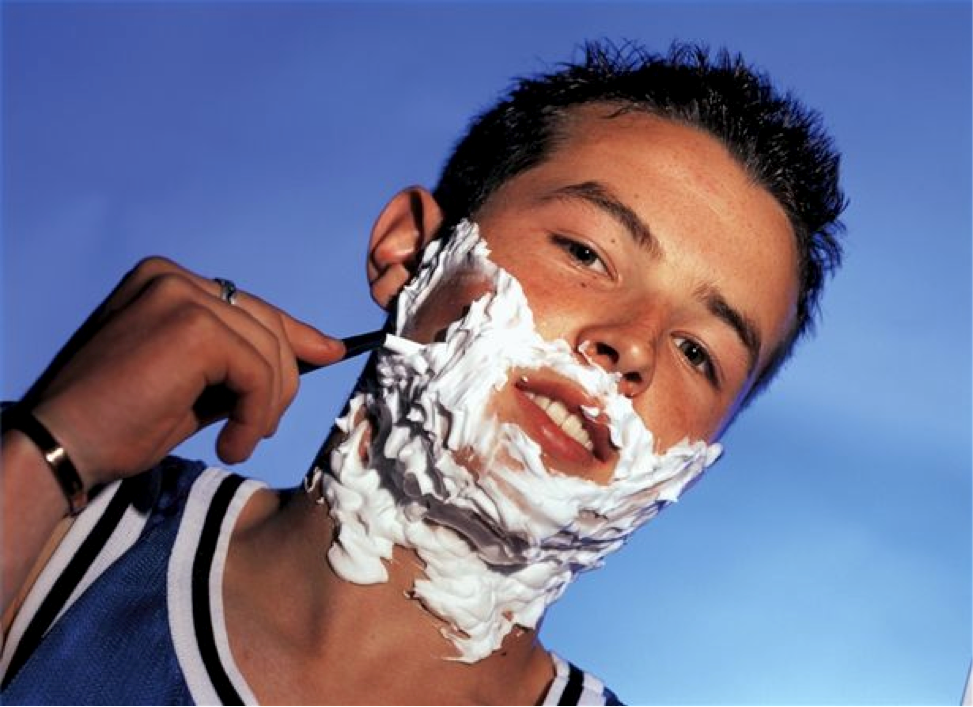 All people grow at different rates and to different heights; this is largely due to how tall the person’s family members are. Various parts of the body tend to grow more quickly than others, such as the legs and hands, which could lead to a somewhat awkward appearance. These differences eventually even out with the completion of puberty.

The testicles and scrotal sac nearly double in size during puberty.  As the testicles grow, the skin of the scrotum darkens, enlarges, thins, hangs down lower from the body, and becomes dotted with tiny bumps, which are hair follicles. In most males, one testicle (usually the left) hangs lower than the other.1 This is the initial puberty change; penis growth happens later.2

Penis growth tends to be the primary concern for adolescent males during puberty. A boy may have adult-size genitals as early as age 13 or as late as 18. In some cases, the penis doesn’t stop growing completely until age 21. First, the penis grows in length, then in width. Teenage males seem to spend an inordinate amount of time inspecting their penis and covertly (or overtly) comparing themselves to other males. What most males don’t realize is that sexual function is not dependent on penis size and that the dimensions of the flaccid penis don’t necessarily indicate how large it is when erect.1 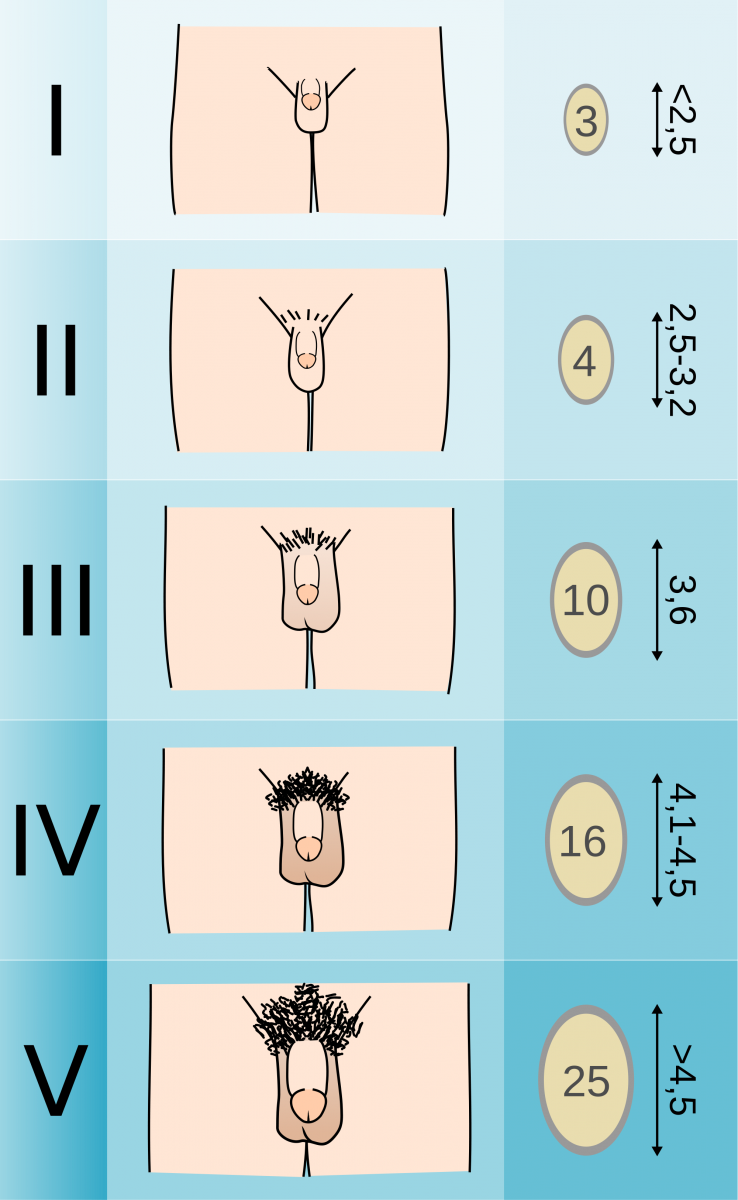 Spontaneous erections are extremely common during puberty. They can happen at unpredictable, unexpected, and inconvenient times, often with no obvious trigger. They are difficult to avoid, but will usually go away within a few minutes. They also become less frequent as males become older.1 Some males also experience nocturnal penile tumescence, also known as “morning wood.” Morning wood is a spontaneous erection of the penis during sleep or when waking up and is common in men of all ages. Morning wood is a remnant of REM sleep cycles and is perfectly normal. 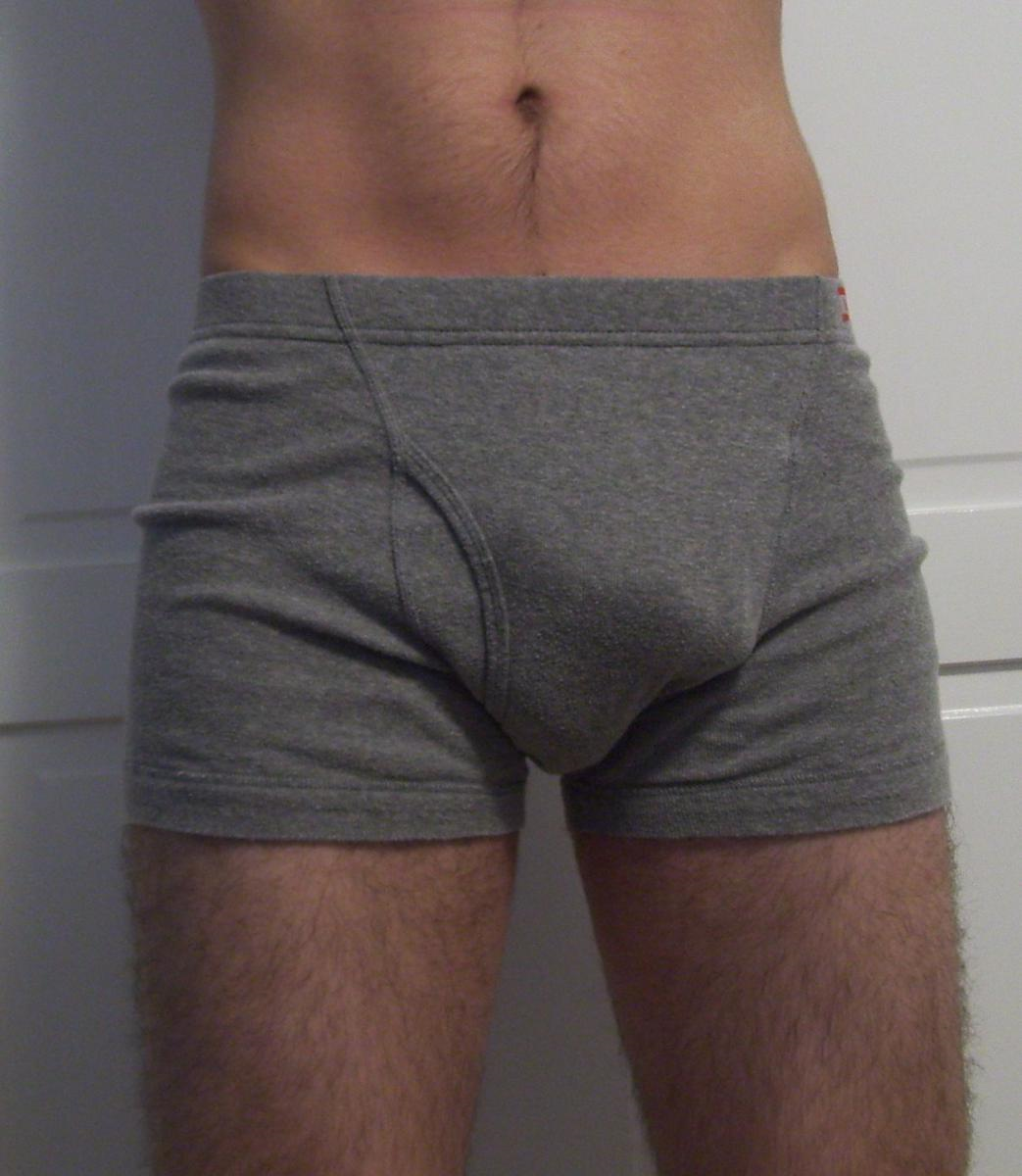 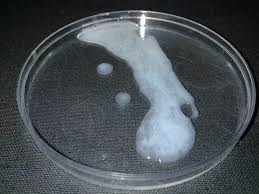 Boys are considered capable of procreation upon their first ejaculation, which occurs about one year after the testicles begin to enlarge. Although males experience erections throughout childhood, they do not usually ejaculate until about a year after puberty begins. The testicles now produce sperm in addition to testosterone, while the prostate, the two seminal vesicles, and another pair of glands (known as the Cowper’s glands) secrete fluids that combine with the sperm to form semen. Each ejaculation, amounting to about one teaspoonful of semen, contains 200 million to 500 million sperm.1

Body hair, also called androgenic hair, grows longer, thicker, and darker during puberty. Pubic hair begins to develop. A few light-colored soft hairs materialize at the base of the penis. The pubic hair soon turns darker, curlier, and coarser in texture, and grows in a diamond-shaped pattern. Over the next few years, it covers the pubic region, then spreads toward the thighs. A thin line of hair also travels up to the navel, sometimes referred to as a “happy trail.” Roughly two years after the appearance of pubic hair, sparse hair begins to sprout on a male’s face, legs, arms, and underarms, and later the chest.1 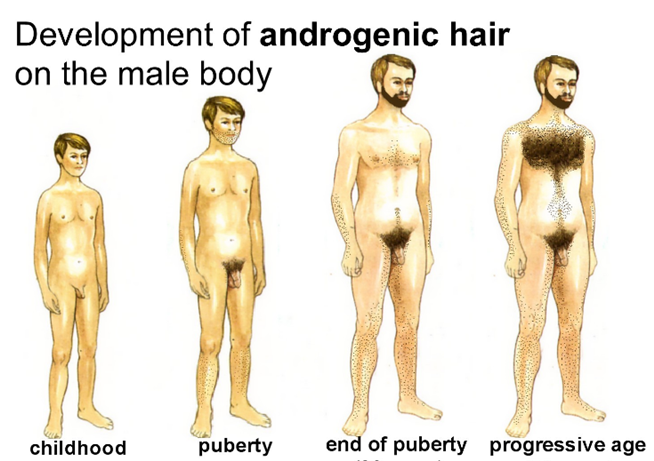 Just after the peak of the growth spurt, a male’s voice box (larynx) enlarges, as do the vocal cords. For a brief period of time, his voice may crack occasionally as it deepens. Once the larynx reaches adult size, the cracking will stop.1  As a male’s larynx enlarges, so does the laryngeal prominence (called Adam’s apple) which becomes visible. 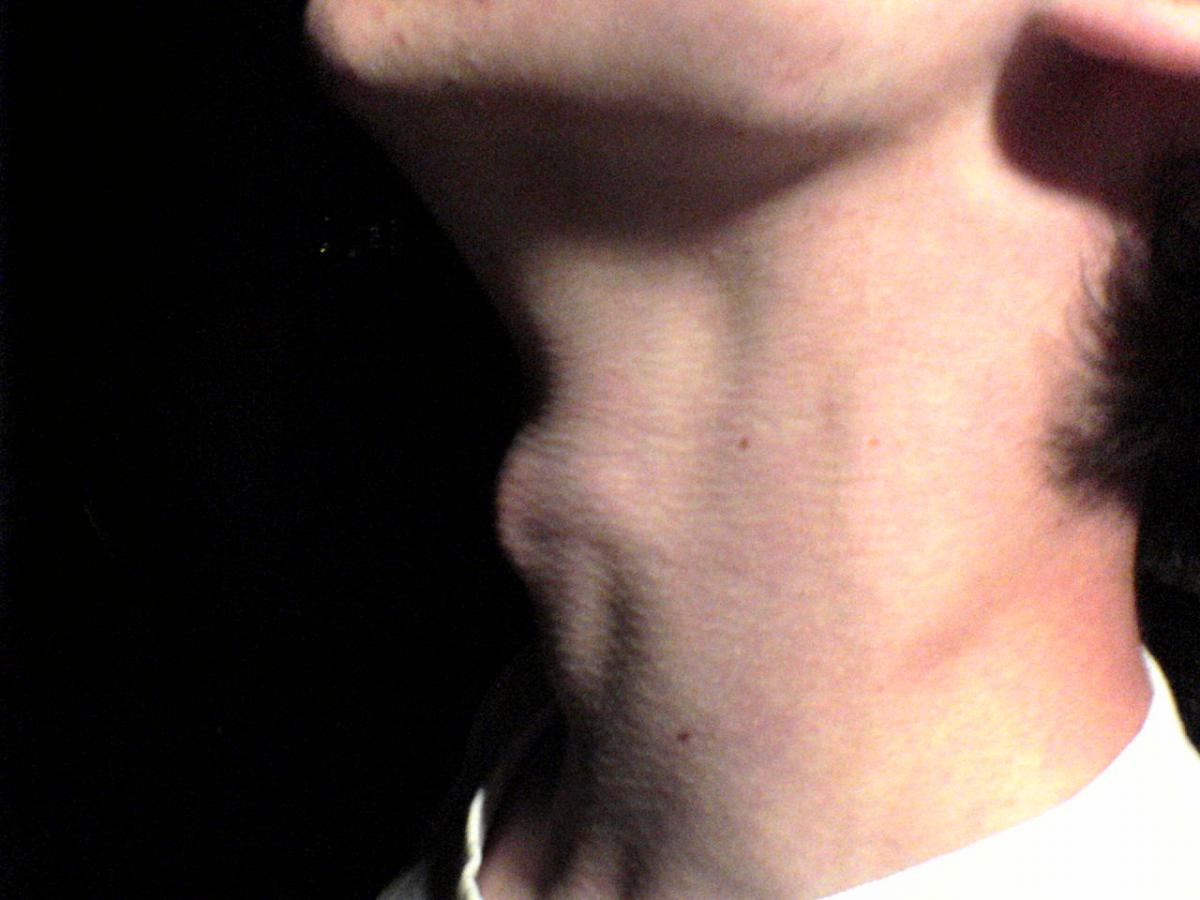 During puberty, the skin on the face, neck, back, and chest will eventually begin to overproduce a type of oil called sebum. Sebum is a natural, necessary substance — it keeps the skin waterproof and fends off harmful bacteria. However too much is a primary cause of acne. The pubescent skin is also getting rid of dead skin cells at a higher rate, and these skin cells — along with the extra oils — are trying to exit the body by traveling through hair follicles and pores to the surface of the skin. These pores and follicles get clogged up with excess oils and skin cells and the blockage starts building up without anywhere to escape. A form of bacteria known as Propionibacterium acnes gets in the mix and causes the blockage to become inflamed. This pushes it outward, creating the pimple seen on the skin’s surface.3 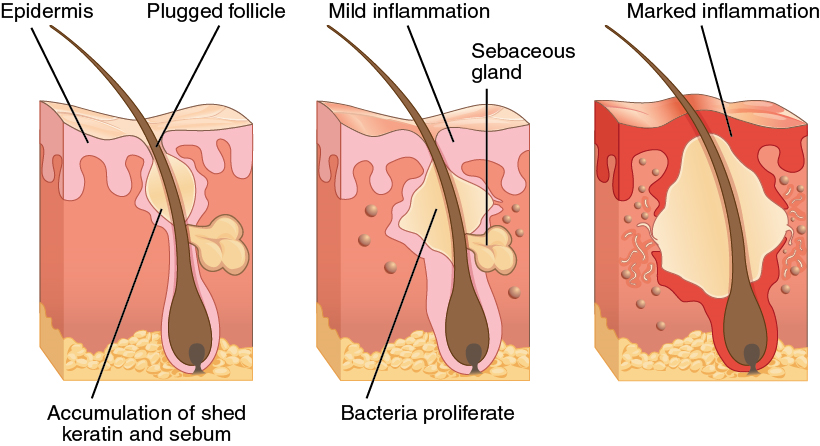 Some boys may also experience growth of glandular tissue of the breasts, leading to a chest with breast-like formations. This is called gynecomastia. This is a temporary development caused by the hormones that are surging through the body and can be exaggerated by obesity. Gradually, these hormones will subside and the breast-like formations will disappear. This occurs in about 50% of pubescent males and lasts for about 6 months to 2 years.3

During puberty, most adolescents feel their emotions become stronger and more intense. Although these emotions can make a person feel confused and out of control, it is a completely normal part of growing up. Many teens find that sports, dancing, writing, music, art, or hanging out with friends are good ways to manage stress and feel more in control of their emotions. Changing hormones can cause teens to feel hyper and restless, and finding an outlet (active or creative) is a great way to release excess energy.6 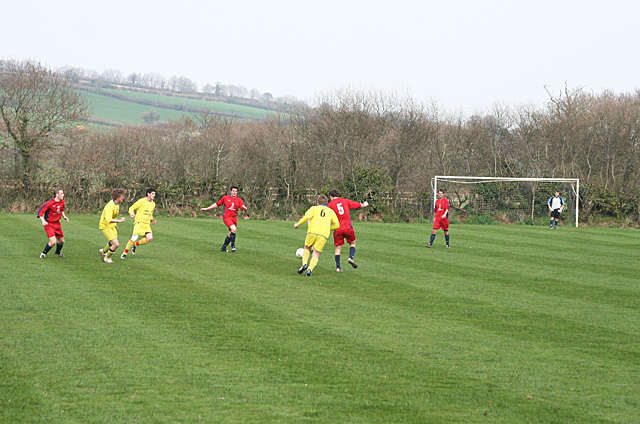 Puberty brings tons of changes so most young people probably have a few questions about what’s going on in their body. Many teens find it helpful to talk to someone who has already gone through puberty — a parent, relative, neighbor, or friend. It’s perfectly natural to feel awkward and embarrassed at first, but talking to someone who has already experienced puberty can be a huge relief. 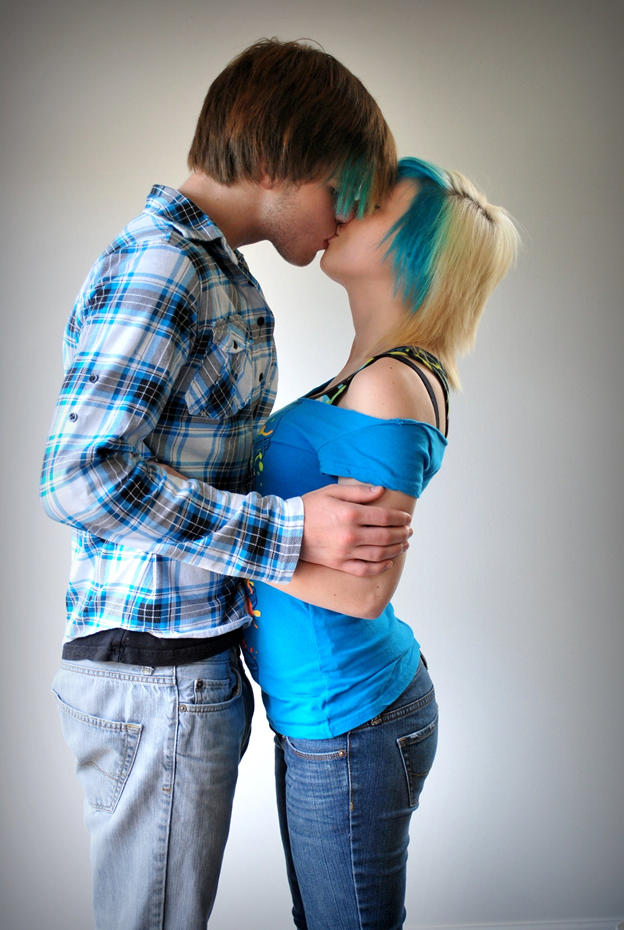 It is so important to remember that everyone experiences puberty! It is a temporary yet crucial part of becoming an adult. Please contact us here with any questions you might have!

For more information about puberty, check out the following websites: